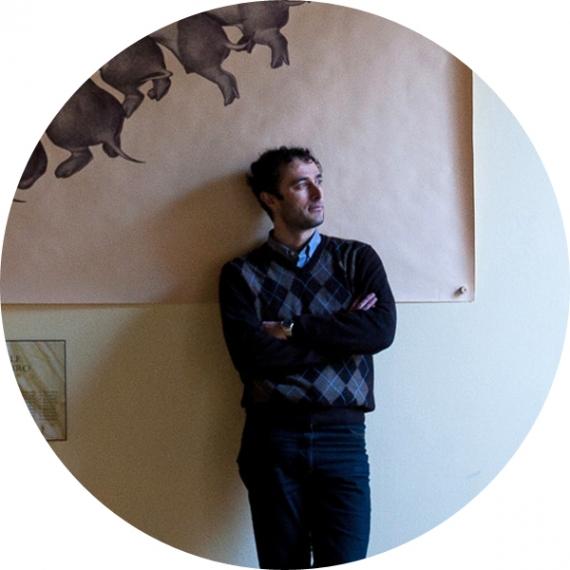 Marcello Carrà is born in Ferrara in 1976. He studied Civil Engineering at the University of Ferrara. He is an artist specialized in drawing with Bic pen in great dimensions (some as long as 8 metres): he surprises with his extraordinary ability of drawing, which is matched with a strong conceptual aspect imprinted on the transience of life, the absolute proximity of death, on fragility and beauty of this existence, which is also evident in the plaques that accompany the works. All of his works are realized by freehand, using solely a grid. He initially focused on the theme of insects and their ephemeral, and at the same time fascinating, existence. Hereafter, always using the pen technique, created another series of drawings with the theme of transience of existence of sows and pigs, then, thanks to the collaboration with a marine biologist from New Caledonia, a series of works that reflect on the dangers that human activity is driving in the tropical marine life. Recently, Carrà revisited several masterpieces by great artists in history: From Brueghel, reinterpreted in the light of the earthquake in 2012; to Zurbaran and Bosch, with his metaphorical reflections on the moral crisis of our age.
He exhibited in the Gallery Antonio Nardone in Brussels, at the Biennale di Venezia, at ArteFiera in Bologna, at MLB home gallery, Museo di Storia Naturale, Museo Casa Ludovico Ariosto in Ferrara, Broni in Bologna and Villa Nuova Italia in Milan.

Marcello Carrà (Ferrara, 1976).
He lives and works in Ferrara.